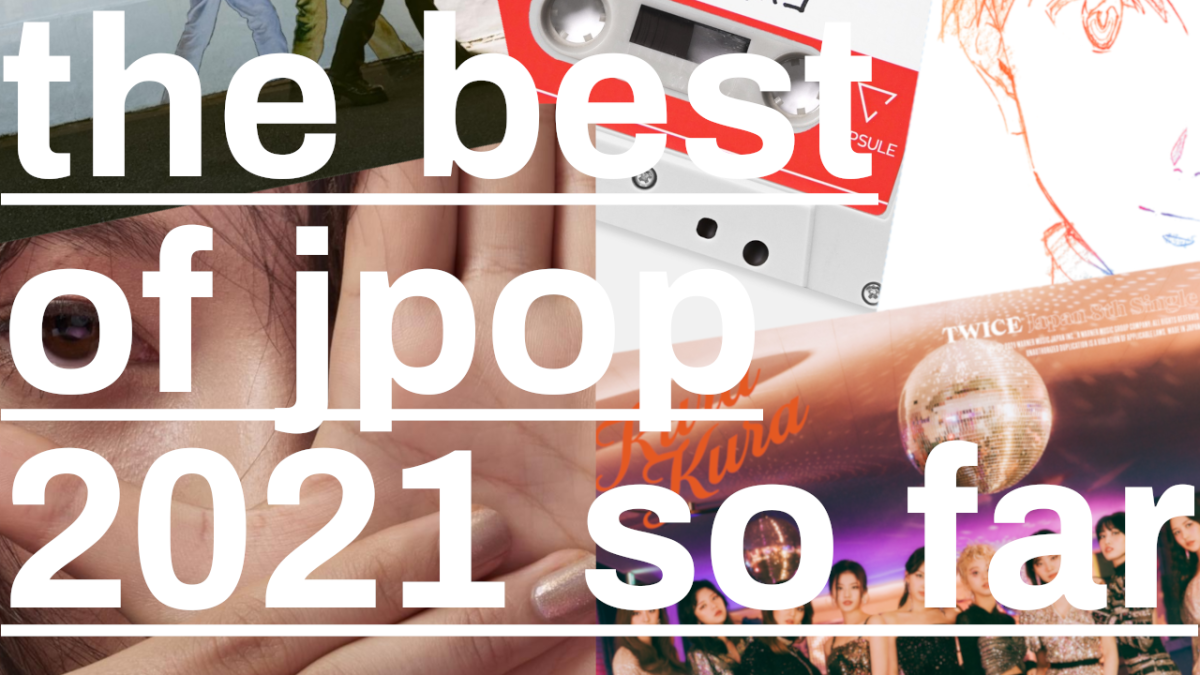 Let’s get a little serious firstly and talk about “Shiwa Awase” by Vaundy. This came across my YouTube recommendations, and at first, I had no idea what to think about it. I had no knowledge of Vaundy, and I had no idea what I was getting myself into… but after the first listen, I was taken away. It is an incredible song, filled with so much gusto and power in its chorus. This is a rock song that gives you goosebumps. If the title is a play on the Japanese word for happiness, then consider me happy I even came across this gem. ⬛

On the flip side is “Kirari” by Fujii Kaze, which takes our song route to funk territory. I also didn’t know much about Fujii Kaze, apart from the fact that he is one of the increasingly-popular male soloists in Japan. What’s remarkable here is that “Kirari” is a more subdued funk-pop track that still manages to have a fun appeal to it. With a little dash of synth and little bit of sassy swag, “Kirari” is a great introduction to this soft-singing singer. ⬛

And then on another side of Japan is, of course, the idol-pop groups. This time, we go right into anime territory, with DIALOGUE+’s “Jinsei Easy?” from the popular Bottom-tier Character Tomozaki-kun (which is great, by the way). Let’s just say hearing the one-minute snippet of this has you hooked per episode, with its fun ad-libs and vocals from each member, and each line of the song being a part you could sing-along in unison with. Sprinkled with game elements to relate with its anime tie-in, “Jinsei Easy?” is an easy level to get yourself in good spirits. ⬛

There had to be one Hello! Project song on this list, considering my love for them is unwavering, and boy, am I ever glad it’s the gag group BEYOOOOONDS. With “Konna Hazujanakatta!” from their most recent single (a title so long, I’m just gonna let you read it above), the girls go meta, poking fun at their idol concept, to poking fun at idol culture in Japan in general, with little Easter eggs in each verse to test if you’re just as wota for Japan’s idol scene as I am. It’s a generic pop song, but it is completely saved by its unique lyricism, skits, and concept. There’s just really no hating on this. ⬛

The Light by FAKY

I fell off the FAKY bandwagon years ago when things just didn’t seem to pick up following some slamming releases like “Candy”, but when “little more” came out, I had some hope. That hope then manifested into total appreciation when “The Light” brightened up the room – a complete reverse of their girl-crush stuff, FAKY goes for a light-hearted jazz-pop tune that will have you singing along with a wide-enough smile. It is a gem of a song, one that I don’t think has had its due (can we please give them a “Rollin'”-style resurgence?). To the light, we go. ⬛

give it back by Cö shu Nie

Back to anime territory, if you’re familiar with Tokyo Ghoul and Promised Neverland, then you likely recognize the tinge in the vocals of this next track, tied-in to the anime series Jujutsu Kaisen. Cö shu Nie’s “give it back” is a surprisingly formidable track, as their music tends to sound the same; however, in “give it back”, the formula is thrown out with soft delivery into the beginning before turning into a tour de force of vocalisation. Somehow, even with my terrible jokey renditions of this track, I can still really appreciate its beauty. ⬛

Now, at first, I didn’t think anything of this song. It’s not as good as “BETTER” or “Breakthrough”, nor is it on par with anything good from their Korean releases, but after hearing a joke rendition (yes, it was a cupcakKe mash-up, of all things), there it was: an appreciation for the strange structure of “Kura Kura” and its instrumental. I still don’t quite know how to describe it other than a bass-and-synth merged with pop elements, and it just works so nicely. If this is the direction that TWICE’s Japanese music is going in, consider it magic. ⬛

Speaking of TWICE, let’s talk about NiziU. If TWICE is the JYP-formed nation’s girl group in Korea (waiting for SONES to kill me after this), then NiziU is (almost) there for Japan (waiting for 48G fans to kill me after this). Their talent is basically evident in “Poppin’ Shakin’“, which has the girls singing on top of a dance-pop instrumental that sounds like it’s filled with cotton candy and rainbows. Yes, it’s a lot, but it’s a good form of being Team Too-Much, as it’s catchy, fun, and just full of love. As they say in the song, just have fun, like I’ve had before! ⬛

Now, who knew CAPSULE would make a return in 2021? I sure as hell didn’t. Has it really been 84 (actually 6) years? The duo made their return only a few days ago, and I already have a deep appreciation for the song: it’s “WORLD OF FANTASY” 2.0. However, the difference here is that it is that same song with elements of CAPSULE’s lower-case past, putting nostalgia at the forefront. “Hikari no Disco” might not be the best CAPSULE song by any means, but it is certainly one of the best returns of 2021. ⬛

On the topic of disco, or I guess in this particular case, city-pop, let’s talk about “Sugarless Kiss” by seiyuu Mimori Suzuko. Used as a tie-in to anime series ODDTAXI as its ending, “Sugarless Kiss” makes this list for its absolutely pure influence from 80s synthpop, right down to its strange rough-around-the-edges distortion of vocals and instrumental that was evident with Japan’s ancient 80s sound mastering. It is a fun jam, one that my friends knew I’d get into when they heard the small snippet on ODDTAXI. Hey, I’m just a sucker for a sugarless 80s kiss. ⬛

Meiakuyaku (THE GREAT VILLAIN) by Frederic
from the single “Meiakuyaku”
Released: 2021/04/28

No one can deny my love for Frederic, so it really is no surprise that a Frederic song is even on this list. While it has been a relatively quiet two years for the group, and I don’t think they have been as popular as of late, the group continues to pump out quality track after quality track, and “Meiakuyaku“, also known as ‘THE GREAT VILLAIN’, is no exception. It is a haphazard song, with segments not flowing as one would prefer, but it is also a Frederic song, so it still retains its catchy sound, and it just sounds fun. I’m not disappointed in the slightest. ⬛

Bet you thought you wouldn’t see a 48G or a Sakamichi song on this list? Ha, you thought wrong. I wouldn’t blame you, though, considering the status of each group looking very uh… bleak. That said, the Sakamichi group continues to, at least, have music out, and perhaps the best out of it all, and one of the best of 2021 so far, is “BAN“, a hard-hitting dance-pop track fueled by guitar power, vocal unity, and drums… it’s a step-up from anything I’ve heard Sakurazak46 do (even before their formation). There’s no BAN-ning of this song, here. Let’s keep it going. ⬛

Japan is no stranger to female empowerment anthems, but damn, does CHANMINA take it to next level. The only real hip-hop song on this list, “Bijin” puts Japan on check about beauty standards, and it hits with every line. You can really feel the burn with her vocal and rap delivery, and let’s be for real, this is fiiiiierce. When CHANMINA tells you to ‘look at this’, you best be looking. Bow down to the f*cking beautiful queen. ⬛

The years have been especially good to Hoshino Gen, who’s now become an incredible name in the Japanese pop industry. 2021 is no exception – he continues to pump out hit after hit, and I don’t foresee signs of stopping. His talent shines through “Fushigi“, a mellower midbeat pop song that puts synth in full display with a few elements of funk that is evident on many of his popular tracks. Despite that, it is the laid-back feel of this song that showcases his versatility with his music. I can’t recommend this enough. ⬛

One Last Kiss by 宇多田ヒカル

I’ve once again saved the best for last. Having reviewed this previously, there’s only so much I can say about this but… “One Last Kiss” is, so far, the best J-pop song of 2021. As the tie-in track for the last of the Eva rebuilds, it only makes sense for it to be a sentimental, yet beautiful pop song built around this sense of nostalgia and love. What’s even more remarkable is that this is a joint effort between her an A. G. Cook (of PC Music fame, hello!). It’s a beautiful but bittersweet track… one that continues to make me feel goosebumps upon every listen. ⬛

What’s your list? Will it match mine? If so, you share the same taste (and I certainly hope it’s a good taste, haha). Comment below what other J-pop songs I should be checking out from the year, and perhaps you’ll see it on an end-of-year list coming in December!